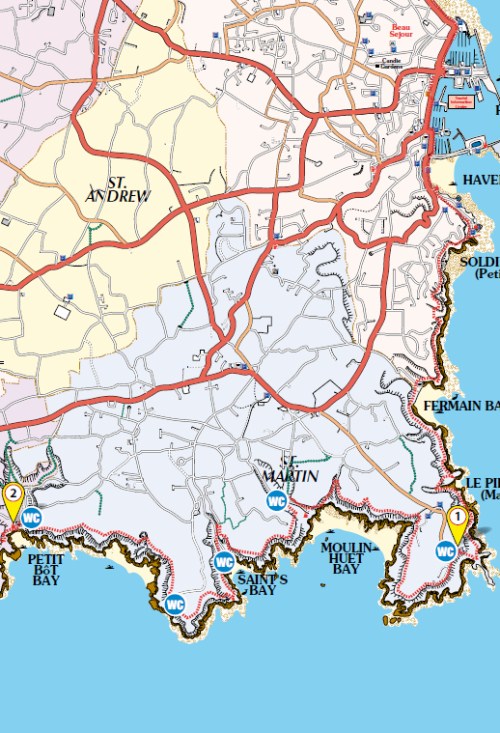 Follow the road along cliff top to the left of the Hotel. As the road turns sharp right, take the steps ahead of you onto the cliff path. Follow the main path signed repeatedly to Petit Port. Ignore odd dead-end paths off to your left until you reach a small lane.

Turn left onto the lane and follow until you rejoin the coast path just after two high communication masts and before the German Bunker. Continue until you reach the top of a flight of steps. After a short descent, take the right turn onto the coast path through the wooden posts. DON’T continue down the steps into Petit Port Bay!

Continue on this path, until you meet a fork. Take the left path down a short flight of steps and continue until you join a road. Turn left onto the road and at the junction turn left again and rejoin the cliff path which lies ahead of you.

When you reach the lane leading down to Moulin Huet, turn sharp left and continue down towards and past the Tea Room. Turn right down a short flight of steps and then up the series of steps on the opposite side of the valley. At two consecutive ‘T’ junctions take the left following the coastline.

As you approach Saints Bay (with view of the distant Loophole tower) you have an option:

For the purist (EXTREME CAUTION IS NEEDED – STEPS SLIPPERY WHEN WET) : Take a left down steeply cut steps signposted Saints Bay. Follow into the bay and look out for steps behind public toilets that climb out of the valley past the Tower. At road turn left and continue all the way to the headland (Saints Harbour). The cliff path leaves the road on the right up a long steep flight of steps.

At the top turn left and follow the path along the coast passing eventually the low memorial stone at Icart Point. At fork T junction after short wooden bridge turn right (do not descend to Le Jaonnet). Follow the path until you join the road at Petit Bot. Turn left towards the bay taking the short road behind the tearoom.

Leave the bay via the steps beside the parking bays. Continue to take the steps taking the right turn half way up until you reach the top at a clearing with seats, Cross the clearing. Stay on main path, ignoring path to right and minor path off to left. Continue along the cliffs.

Follow the path, which eventually becomes a graveled track. After the track turns inland lookout for steps to the left down into the woodland marked Cliff Path. Take the steps and cross the valley and then at T-junction, turn left keeping initially the wall on your right. Continue along the cliff path.

As you approach next headland, ignore the left turn to La Moye Point taking the main route to the right which passes beside the right-hand end of a low wall. Continue up incline to Le Gouffre, Checkpoint 3 and breakfast!